Case Study - MIRA for Rehabilitation of Adults with Ataxia

In this paper we follow the evolution of a 43 year old patient with cerebellar syndrome using the MIRA system for improving upper limb coordination. Progress was measured using MIRA motion statistics data as well as Berg and SARA scales.

Games are good fun but also extremely practical. In 2010, Daphne Bevalier, professor at The University of Rochester, researcher in psychology, published the study “Perceptual Learning During Action Video Game Playing”, in which he mentioned the multiple benefits of video games on teenagers: smaller reaction time, higher sensitivity to the surrounding environment, distributed attention, better spatial orientation and visual acuity.

MIRA is a software tool based on Exergames, motivating patients particularly when repetitive tasks cause discomfort. It also registers time spent exercising, number of repetitions, execution speed, involvement, accuracy, distance and points, which are useful parameters for evaluation.

As such, this paper considers the effectiveness of MIRA as treatment and evaluation for a patient with cerebellar syndrome. 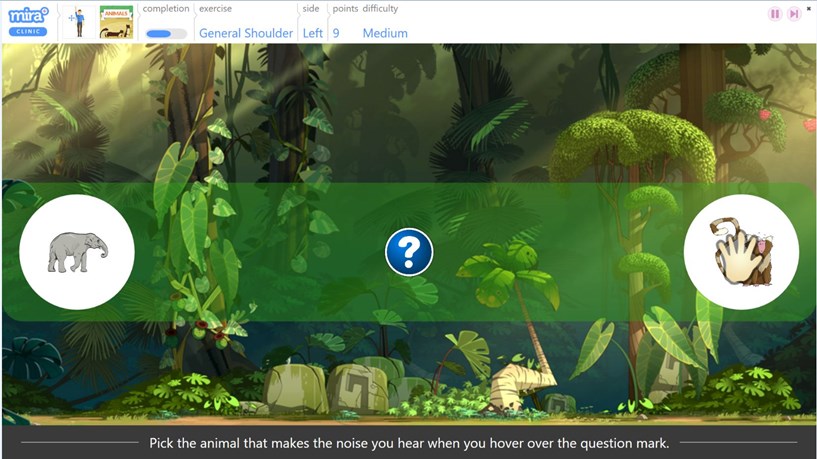 Cerebellar syndrome (a.k.a. cerebellar ataxia) is a form of ataxia originating in the cerebellum, characterised by lack of coordination and balance.

It presents clinical symptoms such as lack of voluntary movement coordination, manifestation of a characteristic tremor, difficulty to maintain gait and balance, hypotonia, dyssynergia, dysmetria, dysdiadochokinesia (impaired ability to perform rapid, alternating movements), dysarthria, nystagmus (difficulty in eye movement coordination). The movement deficit is on the same side than the cerebellar lesion. 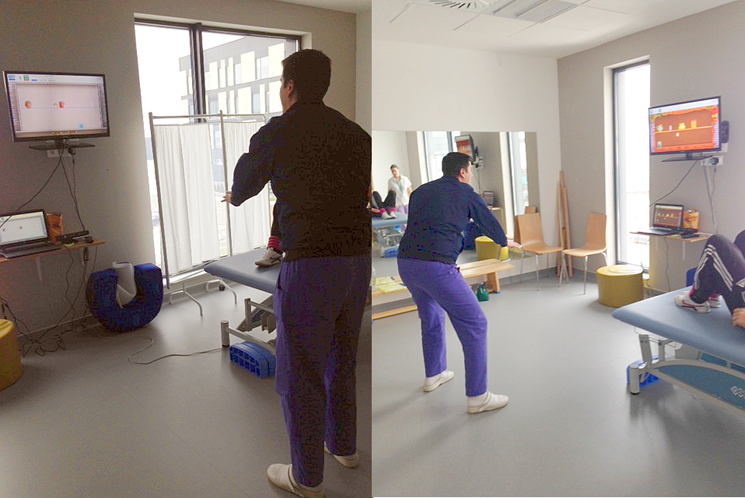 Assessments were performed at baseline and after 2 weeks of treatment

We followed the data statistics provided by the MIRA platform from which we emphasize those regarding Distance, Moving Time and Average Acceleration. Analysis of the data demonstrated that the motion becomes linear, with minimum distance and acceleration and a much more controlled and efficient movement for performing the required tasks. The distance performed with the upper limb towards the target is shorter, with minimum oscillating movements. Also, the patient is able to keep his eyes open for much longer (only 20-30 seconds initially) and there is an improvement in body posture (as you can see in the images).

Other improvements were regarding gait and posture, ability to keep eyes open for a prolonged period and an increase in the range of motion of the arm, which are also visible in the Berg (initial score 13/56, final score 26/56) and SARA (initial 32, final 15) scales. 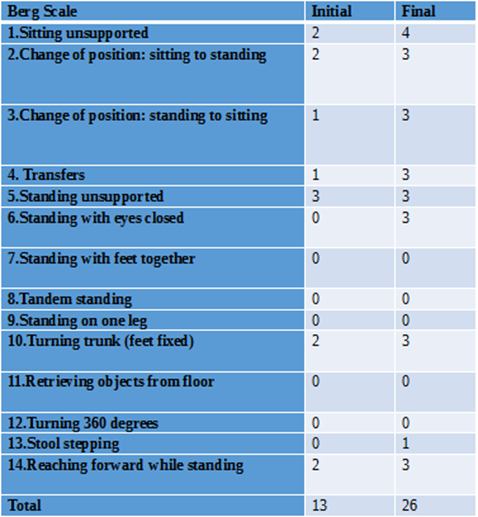 Cerebellar syndrome is a debilitating condition which produces many frustrations, especially to patients that are accustomed to being very active. Rehabilitation must be initiated early and can be extremely complex. Polaris Medical uses a multidisciplinary approach in patient recovery, which was very beneficial to this patient whose condition improved very well in a short time, due to a combined intervention including MIRA therapy, speech therapy, physical therapy, occupational therapy, face and limbs massage as well as psychotherapy.

The MIRA system tracks various types of motion data in every session (such as acceleration, deceleration, movement time, speed, repetitions) which until now were only observable by a therapist but difficult to quantify otherwise. Furthermore, the patient was always engaged to use the MIRA software platform and motivated to surpass everyday performances (game points), and found the experience interesting and fun. This case study will be followed continuously in the future and more studies will be performed. 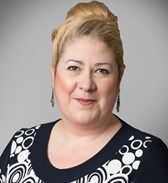 Treatment Base Manager and Physiotherapist at Polaris Medical.

Annex – Scale for the assessment and rating of ataxia (SARA)