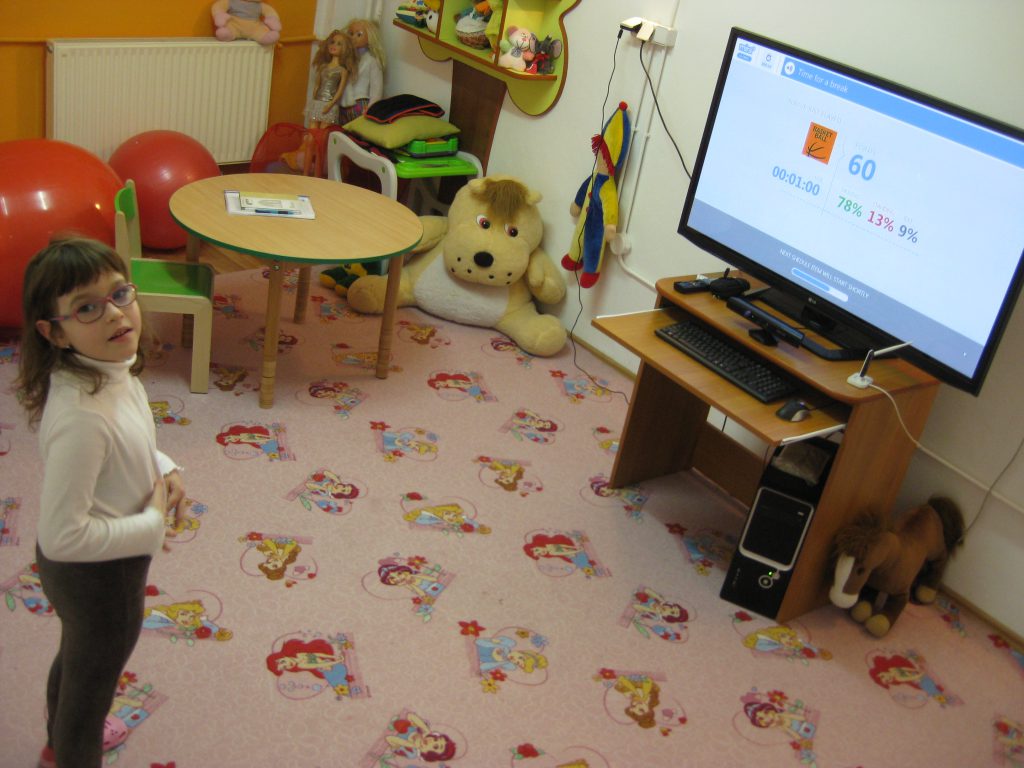 Children with cerebral palsy and hemiparesis

This work has been published in the Journal PALESTRICA OF THE THIRD MILLENNIUM, Civilization and Sport, Vol. 18, no. 1, January-March 2017, 38–41, with the title Virtual occupational therapy in a child with cerebral palsy. Below we present a summary of the study.

Adapted Movement-Based Interactive Video Games (MBIVG) and the Microsoft’s Kinect motion sensor constitute a promising new therapy for children with cerebral palsy (CP). We report the evolution of a 7 year old girl with cerebral palsy stage I GMFCS and stage I MACS presenting with left hemiparesis predominant in the lower limb, who played MIRA interactive video games using the Kinect sensor for 14 months, with a frequency of 3 sessions/week and a duration of 30 minutes/session. During this period she also benefited from conventional therapy for CP (kinetotherapy, hydrokinetotherapy and conventional occupational therapy).

Play is a central part in a child’s life. With new sensors such as Microsoft Kinect, children can play videogames which resemble the conventional physiotherapy for children with neurological impairments. The fun and innovative way MIRA exergames can be used to motivate children seems to be effective in improving activities required for daily living, such as motor control and balance.

MIRA Rehab has developed clinically-based video exergames (exercises in the form of games) as a tool for rehabilitation therapy, involving exercises that have the potential to improve motor function. The purpose of this case study was to describe the evolution of a young girl with cerebral palsy (CP) who played MIRA interactive videogames for 14 months, whilst also benefiting from conventional therapy for CP. 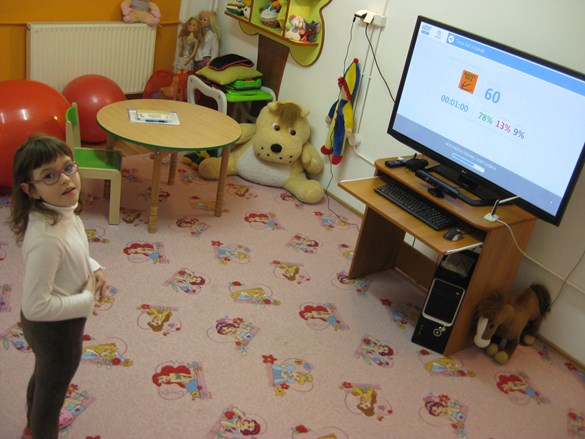 Since the age of one, S.I. started a physical therapy programme, consisting of kinetotherapy (treatment of disease through movement and exercise), hydrokinetotherapy (treatment through movement and exercise in water), and occupational therapy. During our first visit to S.I., in October 2014, she complained of difficulty in running, jumping, climbing stairs and playing games that require coordinating both hands.

On clinical examination, there was a positive Babinski sign on the left side, which is consistent with patients with a neurological condition, and asymmetric deep tendon reflexes (exaggerated on the left side). In addition to these observations, a moderate spasticity, quantified as 2 on the Modified Ashworth Scale was noticed for the triceps surae (a muscle in the lower leg). An abnormality in purposeful movements in the left hand was recorded, and due to this, she predominantly used her right hand.  More complex movements could be performed with both hands, however with a moderate difficulty with the left hand.

Although S.I. was able to walk independently, she had trouble placing her left heel on the floor to initiate the walking movement (heel strike). She was able to run at a slow speed, and was unable to perform a left single leg jump or maintain balance using solely the left foot.

Since October 2014, she benefited from virtual gamified therapy with MIRA. The interactive video-games from the MIRA platform (Move, Follow, Catch) were played for 30 minutes per session, 3 times each week from October 2014 until December 2015. 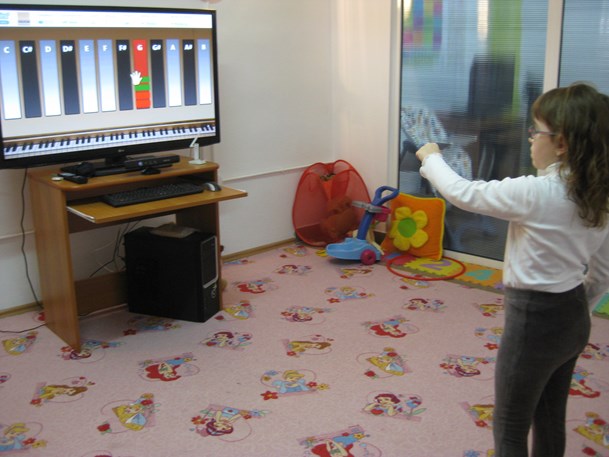 The table below shows the scores pre and post Mira intervention.

Figure 1. Evolution of the total points for the left and the right hand gained in the MIRA testing schedule during 11 sessions of evaluation

For further information on these scales, please click on the following links: ABILHAND-Kids Scale, Quest, and Paediatric Balance Scale.

At the final visit, S.I. showed improved motor skills, and was able to run and climb stairs without assistance. She no longer complained of difficulty in playing games that required coordination of both hands, and did not neglect her left side. Attention and visual-spatial skills were also improved. The spasticity on the triceps surae muscle in the leg decreased from 2+ to 1+ on the Modified Ashworth Scale. Heel strike on her left foot was possible with the use of orthopaedic shoes and hinged ankle foot orthosis (a device used to support the ankle). The independent finger movements of the left hand and jumping on one foot remained impossible, whilst balancing on her left foot was possible for less than 10 seconds.

Both parents and the child considered the MIRA system as “very efficient” in the final satisfaction questionnaire. No adverse effect of the exergaming was reported during 14 months of treatment.

MIRA games train the gross motor skills of the upper and lower limbs, the body’s balance and coordination, visual-spatial ability and hand-to-eye coordination. The exergames also have the ability to increase the attention of the patient and limit their spatial neglect. The patient’s enhanced capabilities were noted in four assessments completed.   The area with the most progress achieved was in balance and coordination.

The Kinect sensor provides analytic data that a clinician is unable to detect, such as speed of movement (average and maximum speed), acceleration (average and maximum acceleration) and patients’ movements within space. It also provides functional data such as the total points gained in the MIRA games Gaining points in the exergames requires balance, visual-spatial coordination, hand-eye coordination, attention, a satisfactory IQ and a good visual acuity. The MIRA platform provides adapted games for children with neurological impairments, with varying difficulty and exercises focusing on coordination. The Xbox Kinect does not require patients to hold a device during their exercises, which may be difficult for patients with neurological impairments to coordinate. The exergames are appreciated by both children and parents and can be considered a promising new tool for rehabilitation professionals in the treatment of children with cerebral palsy.

This paper presents the clinical evolution of a CP child after training with the exergames form the MIRA platform. It signals the emergence of a novel therapeutic instrument in the rehabilitation of the patients with CP. Since children like playing, the adapted movement-based interactive video games are an appealing method of rehabilitation for them, ensuring a good compliance to treatment. 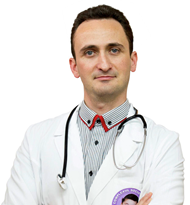 Dr Ionut Moldovan MD, PhD, neurorehabilitation physician, consultant at the Alba-Iulia Emergency County Hospital and at the ”Maria Beatrice” Socio-Medical Services Complex, Alba-Iulia, Romania. Dr. Moldovan is a member of the Romanian Society of Rehabilitation. His domain of interest consists in neurologic rehabilitation in children and adults, using both conventional therapies and innovative technologies, aiming to increase the quality of life and the functional independence in patients with neurological disabilities.