Care and prevention of falls for people with dementia

Falls are a common health concern and a leading cause of accidental death in older people worldwide. Over 30% of people aged 65 and over and 50% of people aged 80 and over fall at least once a year. On a more positive note, robust evidence has demonstrated that specific strength and balance exercises are effective in reducing falls. However, there is a dearth of research that has specifically investigated falls prevention exercise interventions for people with dementia.

To tackle this issue, we applied gamification theory and user-centered design to develop MIRA Exergames (physical exercises incorporated into video games) specifically for older people to train lower limb strength and balance. We have commenced a study that included a person with dementia, Laura, whose case study we present below.

Laura is in her 80s and had recently moved to a new flat in a sheltered housing facility.. Her primary interest and that of her family was to help her socially bond with other residents. She started the Exergames facilitated by a Rehabilitation Assistant together with the other residents. Laura needed a lot of hands on support at first to correctly get the technique required for the exercises, but after a few weeks she was following most of the programme without promptings. It was noted by Laura’s family that she appeared to   improve both physically as well as in mood and confidence, and even though Laura was not usually interested in technology or exercise, she enjoyed playing the Exergames.

Falls are a leading cause of accidental death in older people and as the population ages, falls and associated injuries are likely to increase. An estimated 424,000 fatal falls occur each year, making it worldwide the second leading cause of unintentional injury death, after road traffic injuries (WHO, 2016). Over 30% of people aged 65 and over and 50% of people aged 80 and over fall at least once a year (Blake et al.,1988;Gillespie et al., 2012). The direct and indirect costs of falls are substantial, in the UK costs are estimated at more than £2.3 billion per year (NICE, 2013) and in the US, treatment for falls was estimated as over $31 billion in 2015 (Burn et al., 2016).

Several medical conditions are related to a higher risk of falls, such as Stroke, Parkinson’s, diabetes, cardiac arrhythmias or cognitive impairment (WHO, 2007). In particular, people with dementia have 8 times more risk of a fall that those without the disease (Muir et al., 2012; Allan et al.,2009) due to problems with postural instability, impaired gait, medications, and vision impairment (Shaw, 2007).

Robust evidence has demonstrated that specific strength and balance exercises are effective in reducing falls in the community (Gillespie et al., 2012). But there is a dearth of research that has specifically investigated falls prevention exercise interventions for people with dementia. A recent systematic review and meta-analysis (Burton et al., 2015) found that exercise programmes may potentially assist in preventing falls in people with dementia but more research is needed. It is known that older people in general have low levels of physical activity and there is low uptake and adherence to recommended falls prevention exercises without support from therapists (Lord et al., 2003), however levels of exercise adherence in people with dementia has not yet been explored.

To tackle this issue, we applied gamification theory and user-centered design to the development of Exergames (physical exercises incorporated into video games for use rehabilitation using natural interaction sensors, such as the Microsoft Kinect) specifically for older people. Feedback from older users and therapists was incorporated into the design of the Exergames and continual feedback was given so that improvements could be made. Technology with remote sensors enable real time, reproducible and reliable movement pattern analysis. With the advent of gamified rehabilitation programmes, benefits may be seen through increased motivation and entertainment (Lange et al., 2009) which may lead to improved adherence to rehabilitation programmes. They are also inexpensive, can be safely used in the home and can interact with the user to ensure that correct movements and adjustments are made. 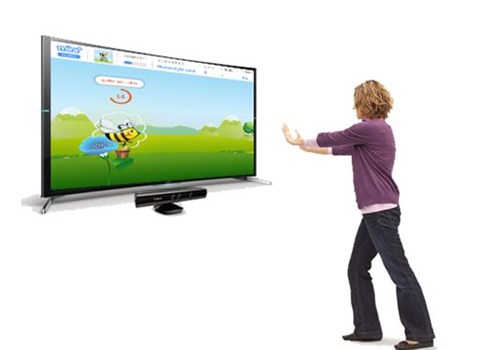 We have commenced a study that uses MIRA as a gamified falls prevention intervention, in several sheltered housing facilities in the UK. MIRA is a software platform containing Exergames developed based on best evidence for older people which also gathers statistics data regarding movement performance and treatment adherence during the sessions, allowing clinicians to create personalised treatment plans adjusted to the needs of each individual. Although the primary aim of the study is to improve balance and motor function in older people, a person with dementia (moderate stage) asked to use the Exergames and we present this person’s case below.

Laura’s case – learning to use MIRA Exergames
Laura is in her 80s and according to her daughters’, was diagnosed with Vascular Dementia two years ago. 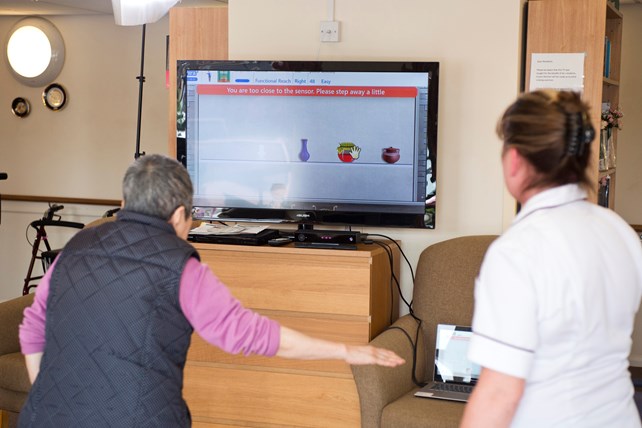 “Laura took part in the Exergames research at a time when she was making the transition from her daughter’s home into a flat in a sheltered housing facility. The scheme manager at the Sheltered Housing facility approached me and asked if Laura could take part as she thought it would be a good way for her to get to know the other residents”, explains Margaret Clarke, Rehabilitation Assistant.

Being part of the Exergame programme appeared to help Laura settle into her new flat and the sheltered housing facility. It also gave her the opportunity to meet the other residents three times a week for 12 weeks, which appeared to help her socially bond with other residents. Laura’s daughters were surprised that their Mum was taking part in the trial, as they say she wasn’t really one for exercises.

“It was challenging for both of us getting to know the Exergame software and the different games. She needed a lot of hands on support at first to get the technique correct, so we took it slowly. This allowed her to feel the movements as she was unable to retain the information from the quick tutorial at the start of each exercise. It was the repetition of movement and verbal instruction that worked best. After 12 weeks, Laura could follow most of the Exergame programme without prompt. She even mastered the techniques for the knee flexion exercise, which appeared to be the most trickiest to learn for most people. Laura appeared to fully enjoy the Exergames, was always eager to take part and would be always waiting for me to arrive and start playing. I feel the Exergames really helped Laura’s confidence and with the interim period of moving into a new home and unfamiliar surroundings.”

The first concern I had in regards to using technology was about its usability, and when we started the study we had a lot of sceptical looks from participants, therapists and outsiders: how would older people get along with this?

Margaret shared her experience: “I started using the MIRA Exergames in April this year (2016). I have lots of experience of teaching exercises on a one-to-one basis and in a group setting, but I didn’t have very much computer technology experience. So although I had some training in the use of the Exergames, it was basically on the job training that was needed. I don’t usually use computer games leisurely. I usually work as a Rehabilitation Assistant within a Falls Prevention Team of Nurses, Physiotherapist and Occupational therapist but mainly assist the physiotherapists teaching Otago home exercise programmes to patients’ at risk of or prone to falling. As I got to know the Exergames and how MIRA worked I became much more confident.”

Margaret explains that MIRA Exergames could be used for people with dementia, due to the fact that the Exergames can be adjusted to the level of difficulty that matches each person individually and that people enjoy playing the games and forget that they are exercising: “I have taught quite a few patients in my usual job as a Rehabilitation assistant who struggle with Dementias. Small sessions are best and lots of repetition. Teaching the person on a one-to-one basis and tailoring the programme for the person is usually the best method. Treating the person with respect and dignity is of course important and we have found the fact that the Exergame sessions are fun and friendly is very important.” 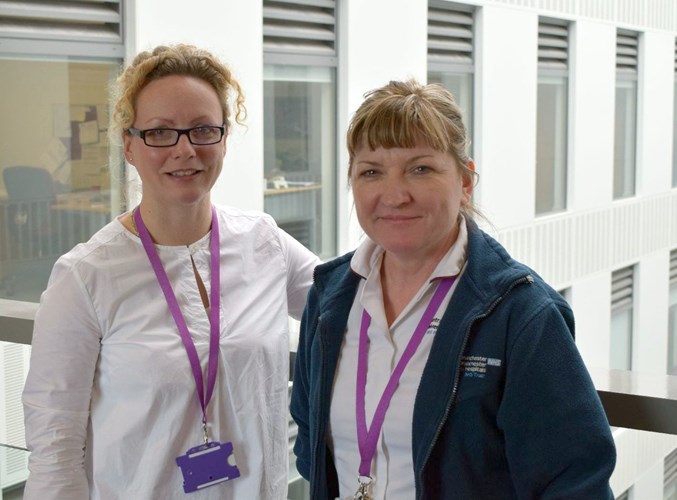 The potential of MIRA Exergames

There were lots of positive stories reported by participants in the study. In Laura’s case, she learned to use the Exergames independently by the end of the 12 week trial, even though she has vascular dementia, and she enjoyed taking part.

“We also had a lady with depression and affected by Alzheimer’s disease. At first she needed to use the support of two chairs, one at each side when practicing the general shoulder exercise and also lots of hands on support from me. By the end of the 12 weeks she could practice this exercise without chair support and instruction.” (Margaret, Rehabilitation Assistant)