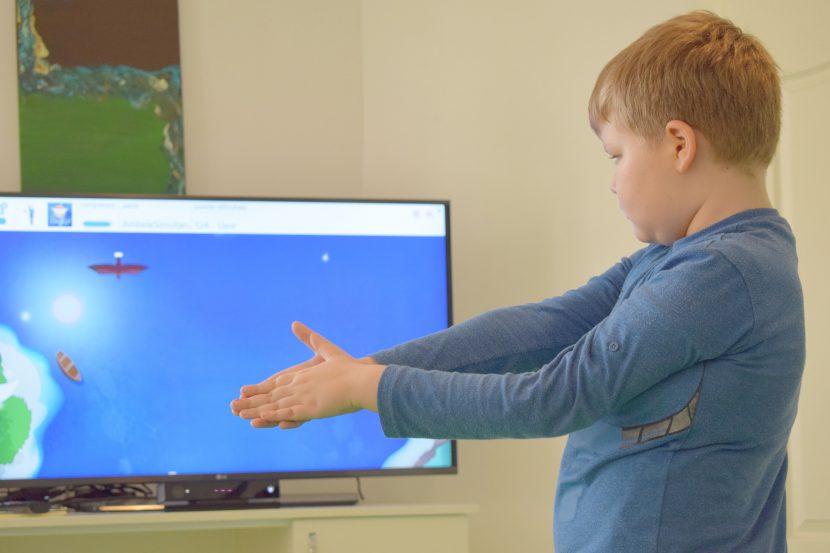 Rehabilitation of a boy with brachial plexus palsy

This study is presented at The 6th IEEE International Conference on E-Health and Bioengineering – EHB 2017, Sinaia, Romania, June 22-24, 2017 and available online on IEEE Xplore.

This report describes a rare case in which only the upper roots of the left brachial plexus was affected by the transverse myelitis of viral etiology and the rehabilitation program for the recovery of the motor deficit. The recovery plan consisted of MIRA exergames and Vojta therapy. The plan was based on the neurologist’s recommendations and therapeutic objectives specific to the diagnosis. The results shown here are after 4 months of therapy. The patient included in this study was diagnosed with superior brachial plexus palsy following a transverse cervical C3-C6 myelitis.

B. Rehabilitation plan
After evaluation, the main physiotherapy rehabilitation objectives were established, highlighting a protocol composed of Vojta therapy, MIRA exergames and a few physical exercises given by the physiotherapist to perform at home.

Vojta therapy is a reflex locomotion method that uses hands on treatment to enable elementary patterns of movement in patients with impaired central nervous systems and loco motor system to be restored once more [6].

MIRA is a software platform that transforms clinical exercises in video games (exergames), enabling interaction through motion sensors (like Microsoft Kinect) and tracking exercise correctness and treatment adherence by remotely monitoring and registering movement statistics. MIRA therapy has been successfully used for the motor rehabilitation and evaluation of different neurological conditions, such as cerebral palsy or hemiparesis [7]. 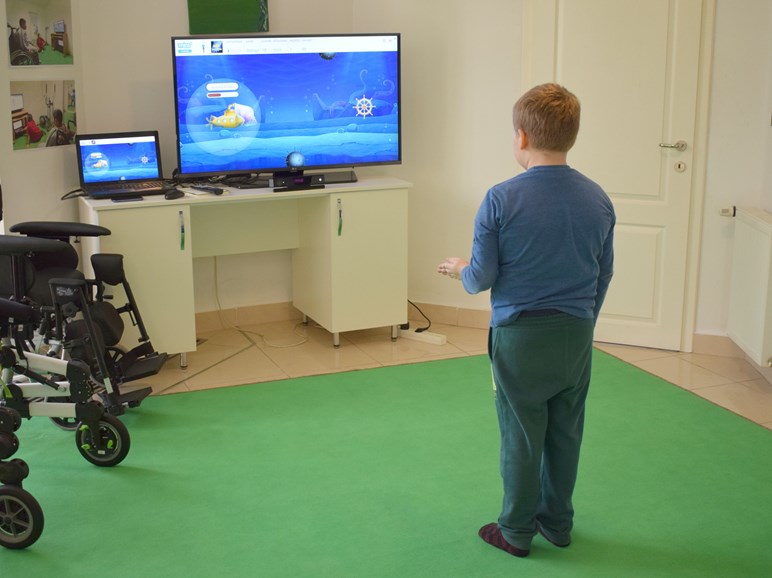 The exergames used in this study involved both hands, and were focused to improve range of motion, strength and coordination in order to prevent joint stiffness, to promote muscle strengthening for affected and unaffected muscles and regain a functional coordination. Initially this was done through assistive passive ROM exercises, assisted active range of motion (ROM) exercises and strengthening exercises. The program consisted in performing 7-8 exergames, 2 minutes each, 4 times per week.

First, movements were performed assisted (the non-affected arm is helping the affected arm, finger crossed at hand level), then gradually the amount of assistance was decreased (fingers on top of each other, as it can be observed in Figure 1) and when it became possible, active movements were performed, against gravity and resistance (thera-bands, weights and wrist bands were added).

C. Motor evaluation of the patient

Functional deficit evaluation has been assessed using Mallet scale for brachial plexus palsy [8] which can be used for children older than 2 years old and evaluates the active abduction and external rotation of the arm and the ability to reach out the neck, mouth and back with the hand. The result is classified in 3 stages:
• I: frozen shoulder in vicious position, holds the arm in adduction, internal rotation, extended and pronated elbow (vicious position);
• II: frozen shoulder in functional position refers to the possibility of the child to get out from the vicious position described for the value I;
• III and IV: intermediary stages;
• V: normal shoulder.

Muscular testing (strength) was measured with Medical Research Council Scale, presenting values 0 to 5, in which 0 presents no palpable contraction of the tendon, 1-2 patient can execute partial or complete movement with no gravity, 3-4 patient executes the movement against gravity, and 5 the patient maintains position against a maximal resistance.

On the first evaluation, when the patient came to our clinic he had no movement at all on his left upper limb. After 4 months of therapy we reevaluated the patient and results are presented in the table below. The biceps brachialis muscle was the first muscle that showed improvement and elbow flexion was the first movement that was possible against gravity without assistance from the non-affected arm. At this point, resistance was added by weighted balls, thera-band or weighted wrist bands. 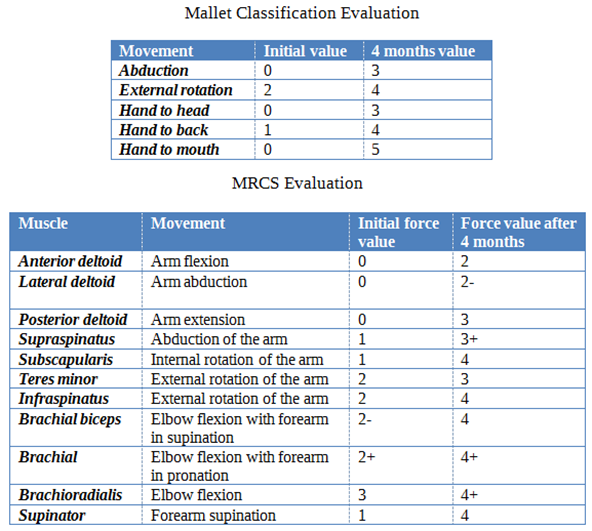 Based on the Mallet scale and the MRCS evaluation the most of the functionality, and respectively the strength, where regained.

Based on the results obtained so far we concluded that MIRA combined with Vojta therapy can be successfully applied in the acute stage of brachial plexus palsy. The next steps of the treatment, we plan on using MIRA only with the affected arm on all the movements used during therapy, including elbow flexion. Further down the recovery process we will apply resistance with thera-band and/or weights to all the movements performed throughout the therapy session. Initially, we combined Vojta and MIRA in our sessions but it became increasingly difficult to maintain the correct position due to the constant evasive movements. Therefore, we decided that from now on we will continue the treatment with classic therapy and MIRA only.