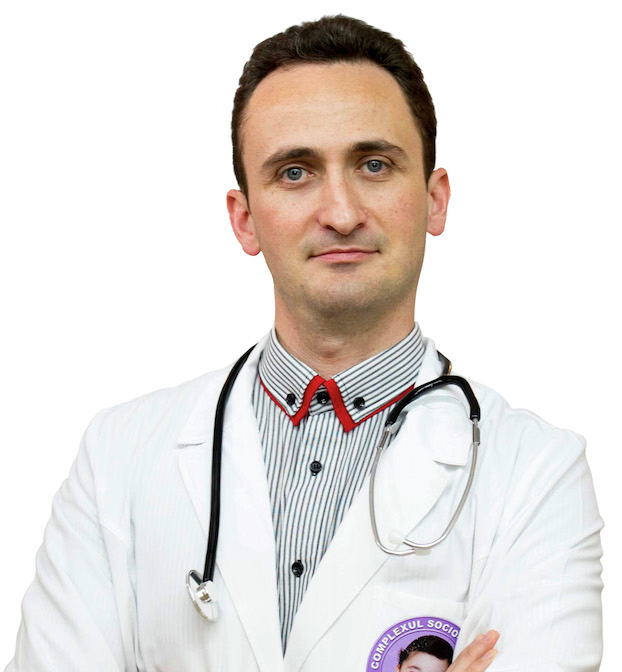 This work was presented at the International Conference on e-Health and Bioengineering, EHB 2017 conference in June 2017. Below we present a summary of the paper – online on IEEE Xplore.

Virtual rehabilitation therapy using the adapted Movement-Based Interactive Video Games (MBIVG) and the Microsoft’s Kinect and the Leap Motion sensors of motion is a promising new therapy for patients with stroke. We report the evolution of an 81 years old male with ischemic stroke and right  hemiparesis who played MIRA interactive video games using the Kinect One sensor and Leap Motion sensor standard games for 10 sessions, with a duration of 30 minutes/session during his 14 days of hospitalization. The patient also benefited from conventional rehabilitation therapy for stroke (kinetotherapy, massage and conventional occupational therapy). At the final examination, the patient showed improved motor skills, the final ARAT score improved from 46 to 57 points (24% amendment), the Fugl-Meyer test score improved from 46 to 52 (13% amendment) and the Berg Balance Scale improved from 43 to 49 points (14% amendment). Virtual rehabilitation therapy was well tolerated, showing no adverse effects after 10 sessions. Despite his age, the patient enjoyed playing MIRA interactive video games and Leap Motion standard games, which ensured a good compliance to the treatment.

Stroke is the major cause of neurological disability and the second most frequent cause of disability in U.S. after back pain [1].  As poststroke mortality has diminished in the last years, the demand for poststroke rehabilitation services increased [2]. Long term rehabilitation programs are needed since patients achieve improvements on functional tasks many months after having a stroke [3].

Microsoft’s Kinect sensor with its two versions, Xbox (version 1) and One (version 2) seems to be an excellent low cost tool for rehabilitation. Unlike other gaming devices, the Kinect sensor can be used in VR environments without the need for a special controller, the movements are captured in real time and feedback is provided instantly. Three randomised controlled studies using VR games and the Kinect sensor for the rehabilitation of stroke patients have been conducted till now. The hemiplegic stroke survivors who received virtual reality training using Xbox Kinect significantly improved balance and functional mobility of the upper extremity [10,11,12]. Being a low cost device, VR training using the Kinect sensor could be a suitable home tratment for stroke patients, opening new opportunities in the telemedicine domain [13].

However, patients with neurological impairment need games that are adapted to their neurological performance in order to avoid the frustration caused by the impossibility of accomplishing tasks that a healthy person would easily perform [14]. For this reason, MIRA REHAB has developed clinically based video exergames as a tool for rehabilitation therapy containing exercises that have the potential to improve motor function, balance and coordination.

A limitation of the Kinect sensor is the inability to identify the fine motor movements of the hands. Thus, it is not suitable for training and assessment the fine motor functions of the hands [15,16], this field of rehabilitation being successfully completed by the Leap Motion sensor in stroke patients [17,18].

The purpose of this study was to develop a 30 minutes session of virtual rehabilitation programme in order to train fine motor function of the hands in an 81 years old stroke patient.

A. The case presentation

At admission, the patient complained of difficulty in walking, climbing stairs and difficulty in activities of daily living that require bimanual abilities and coordination. On functional evaluation, the patient was able to walk independently for moderate distances (50 meters), required supervision when climbing stairs, the Barthel index was 85, Instrumental Activities of Daily Living (IADL) was 5 out of 8 and a borderline cognitive function was registered, the Mini-Mental State Examination test score was 24. The initial Fugl-Meyer subtest for the upper limb was 46 of a maximum of 66, Action Research Arm Test (ARAT) score was 46 of a maximum 57 and Berg Balance Scale score was 43 of a maximum 56.

B. The virtual rehabilitaton method

The patient benefited from a 5 sessions/week, 30 minutes/session virtual rehabilitation (VR) programme, composed of two different techniques. The first one was the MIRA platform games using the Kinect One (version 2) with a total duration of 20 minutes/session, in order to train the balance and the coordination of the body, with the patient standing upright, and also to train the upper limb gross motor function, with the patient seated. Each game was played for 2 minutes, thus avoiding the fatigue of the arm and trunk muscles, followed by a pause of 15 seconds. A total of nine games were played each session. Games played with the hemiplegic arm were also played with the healthy arm. The second one was the standard games of Leap Motion sensor with a total duration of 10 minutes, in order to train the fine motor skills, with the patient seated. The physiotherapist supervised the VR sessions to prevent the patient from falling. 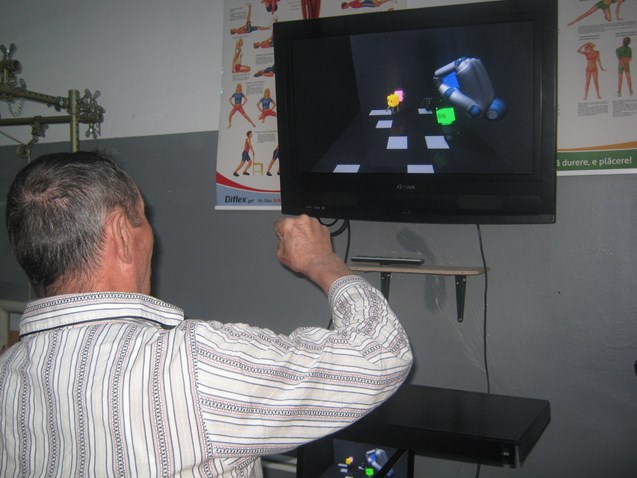 MIRA (Medical Interactive Recovery Assistant) is a software platform created specifically as an aid for physical rehabilitation therapies and assessments, that transforms clinical exercises in video games (exergames) using the Kinect sensor for interaction and motion tracking. The platform registers important statistics on the movement performed by the user, like time spent exercising, number of repetitions, execution speed, involvement, accuracy, distance and points, which are useful parameters for evaluation, while it is also designed as an interactive tool that engages and motivates patients into performing their rehabilitation exercises.

The exergames used in this study involve movements such as general shoulder coordination, functional reach and balance exercises such as sit-to-stand, knee flexion, full body turn, and squats. As exergames combine a movement and a video game, each movement can be performed using several games, of which some of the most used are Catch (in which the user has to catch several items on the screen before they disappear), Izzy the Bee (a game that implies flying a bee to collect pollen and deposit it in the hive while avoiding bugs), Move (a more complex game that requires the user to move an object on a designated path which can be a straight line, diagonal, wave, circle etc.), Firefly (flying a dove to catch fireflies and take them to the sun while avoiding vultures), and Grab (pick up an item from a lower shelf and place it on an upper shelf). The firefly game is usually played with the patient in the upright position and the control of the flying bird is achieved by the rotation of the trunk 90 degrees to the left and to the right (180 degrees body turn), thus training the body balance.

Catch is a game that requires the user to move the arm in order to catch several objects appearing on the screen, in which case they receive points. If objects were not caught in a specific amount of time, they disappear and others will replace them in several locations of the screen. High velocity and high acceleration movements are required for the completion of this game.

In Follow the user has to keep the hand on a shape on the screen and follow it as it moves around the screen on random path. While the users keep their hand on the shape, they gather points and a song will be playing. When their hand is not on the shape, the volume of the song decreases until it stops. The sound reappears when the hand positioning is correct.  High precision movements of the arm are required to complete this game.

The game Move requires the user to move objects with their hand on a predefined path.  Getting out of the path for a certain amount of time implies losing the object (and some points) and starting all over again from the beginning of the path. This game requires movements that resemble the coordination tests used in the cerebellum dysmetria tests.

Grab is the only game that requires the use of two hands to pick up an object from a shelf and place it with both hands on the upper shelf. Moving hands too far away from each other might result in dropping the object, which must be picked up again, and in losing some points. Some points are given when picking up objects and most of the points come when the object is placed on the specified location on the shelf. The movements required are well coordinated, similar to those used in activities of daily living. 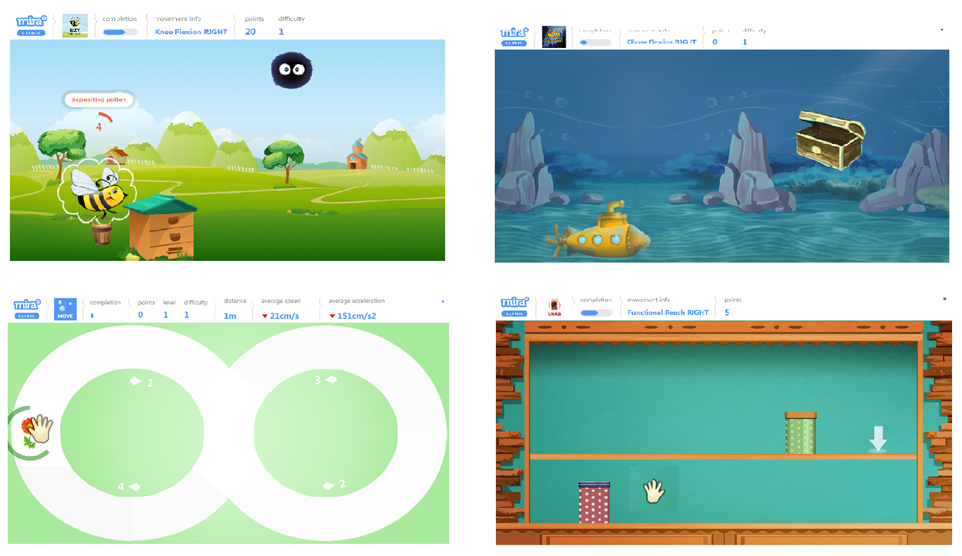 During gameplay, the platform gathers movement statistics for each hand used in the games: time played, moving (active) time, game points, average speed, distance on 3D space and average acceleration. The parameters that are quantified by the MIRA testing games are: distance, average acceleration and points (score).

The platform contains also important evaluation tools, such as pain measurements, the shoulder range of motion tool and cognitive assessment through cognitive exergames that target executive functions. Thus, it is a complex tool that can be used both for physical and cognitive rehabilitation.

At the final examination, the patient showed improved motor skills, he was able to walk independently for a longer distance (75 m) he no longer complained of difficulty in activities of daily living that require bimanual abilities and coordination. The spasticity of the right hand flexor decreased to 1 on the Modified Ashworth Scale, the unipodal equilibrium on the right foot was possible for 3 seconds.

No adverse effect of the exergaming was reported after the ten sessions of VR rehabilitation programme. The new method was considered as ”very efficient” (5 points out of 5) at the final satisfaction questionnaire. The engagement of the patient was surprisingly good despite his age and the fact that he had never played VR video games before.